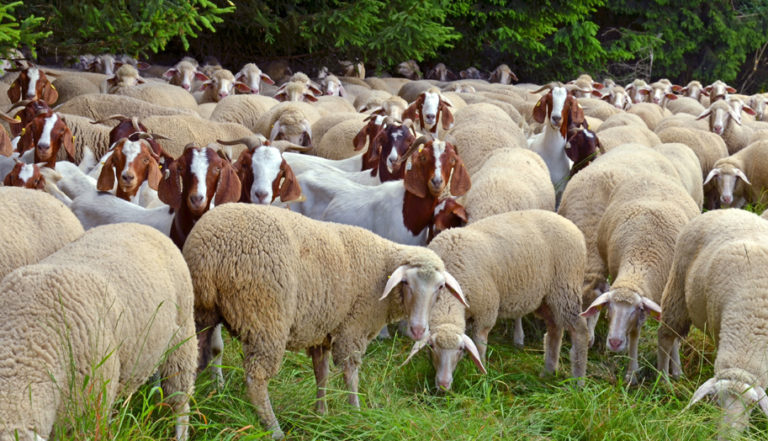 “When the Son of Man comes in his glory, and all the angels with him, he will sit on his glorious throne. All the nations will be gathered before him, and he will separate the people one from another as a shepherd separates the sheep from the goats. He will put the sheep on his right and the goats on his left. “Then the King will say to those on his right, ‘Come, you who are blessed by my Father; take your inheritance, the kingdom prepared for you since the creation of the world.

There is the popular teaching that God will covenant with “sheep nations” in the end and judge “goat nations”. Thereby giving the church a government mandate to effectively create a Christian State over certain nations of this world.

Really? Perhaps you will change your mind after this word study and scripture study.

ONE – Act of Separation is Regards Individuals

Let us study the word ‘nations’ in the Greek in this oft quoted verse 32 (highlights in blue mine): http://biblehub.com/commentaries/matthew/25-32.htm

Surely this proves ‘goat-nations’ and ‘sheep-nations’ is an erroneous interpretation of Mat 25:32? ‘Nations are regarded as a collective but in the act of separation the Lord regards individuals.’ says Vincents. There will be individuals that are sheep and goats in EVERY nation on earth. Sure, some nations will have more sheep than others, but the division is not based on nations, it is based on individual saints. But having a higher percentage of sheep in a nation may make it a more sheeplike nation but a nation in itself cannot be a sheep and inherit eternal salvation.

All the nations of the earth are not the one and only “Holy Nation” of 1 Peter 2:9. They are all corrupt, all goat like. The sheep are scattered amongst the nations but in the end, Jesus will separate out His sheep from the rest. So those born again are sheep, living amongst goats in every nation, waiting for our Lord to Return and then he will finally separate us out.

Is this not clear from Vincent’s Word Study that the ACT OF SEPARATION by the Lord is based on individuals?

“Then you will be handed over to be persecuted and put to death, and you will be hated by all nations because of me. At that time many will turn away from the faith and will betray and hate each other, and many false prophets will appear and deceive many people.”

Jesus does not distinguish which sheep nations will be sympathetic to Christians in the end game, which we are surely fast approaching. All nations will hate us. Including South Africa, USA, UK and natural Israel! All is all.

We have to read Mathew 28 after reading Mathew 24! We disciple the people of the nations knowing that many will fall away and that in the end all nations will hate us – just like they did Jesus in his last days – hated, rejected and cast out Jerusalem to die as a common thief. We pray that Heaven’s will be done on earth as it was in Jesus life and all the apostles.

THREE – Time of the Act of Separation between sheep and goats

The time the sheep and goats are separated are at the end, when Christ judges the nations, that is not this moment, so we cannot separate out what Christ himself has not yet separated out.

Therefore go and make disciples of all nations, baptizing them in the name of the Father and of the Son and of the Holy Spirit, and teaching them to obey everything I have commanded you. And surely I am with you always, to the very end of the age.”

This verse cannot be used in conjunction with Genesis 1 to take dominion over those that do not accept Christ as Lord, God himself does not take that freewill away from such. Why do we use this scripture to advocate the same?

So we baptise, disciple and teach and preach so that all those appointed in every of the 195 nations on the earth become born again into the 1 nation, the Holy Nation. You cannot disciple, baptise or teach that which is not born of the Holy Spirit.